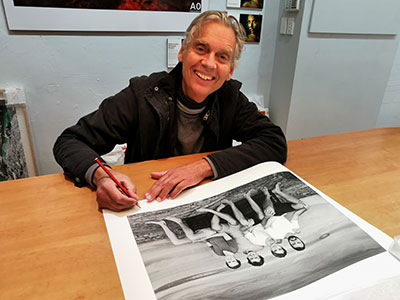 Rex Dupain was introduced to photography at a young age but put his photographic pursuits on hold to study painting in the 1970s at The National Art School, where he later taught painting and drawing. He went on to complete a Master of Fine Arts (Painting) at The University of New South Wales in 1992, and pursued a successful career as a painter. It wasn’t until the mid 1990s that Rex rediscovered his love and talent for photography. His work has since been exhibited widely around Australia and the rest of the world, including an exhibition in Paris in 2010. His work has been collected by major galleries including the Australian Museum and the National Portrait Gallery as well as privately by people including Sir Elton John, Edmund Capon and Baz Luhrmann. Rex has also had several photographic books published, including Bondi to Broken Hill, Australian Images, Inside Sydney, and The Colour of Bondi.