No Shipping: Framed  option is a Sydney Store Pickup Only 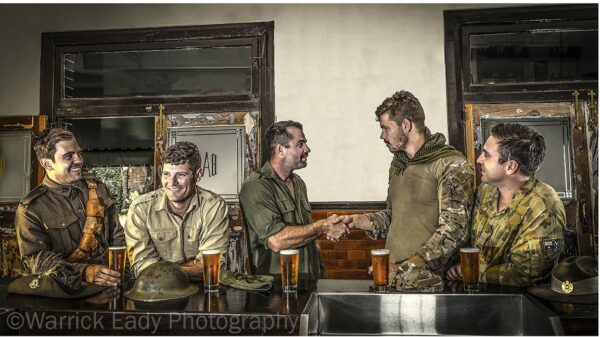 Warrick Eady is an emerging photographer based in Sydney.

A former Member of the Australian Army, with nine years of service and multiple deployments to Afghanistan, Warrick had always had an interest in creating images as a kid, but it wasn’t until his last deployment at the end of 2013 that he really started to pursue photography seriously.

In late 2012, a close mate of Warrick’s was killed in Afghanistan, and as a result, coming to terms with the loss over the next few years were difficult.
Photography, thankfully, proved itself to be a very powerful coping tool. The pursuit of creating an image – visualising a scene, then following through to have it realised in print, has ultimately become that “new path” in Warrick’s life and has been a key factor in both coming to terms with his Mates death and adjusting to a new life post Defence.

In December 2014, Warrick set out to create an image that had been playing over in his mind for years. The scene of soldiers sharing stories, catching up, over a beer at the end of a hard day’s work, with the difference being that these soldiers were born decades apart.

The theme that Warrick wanted to explore was mateship – the idea of a bond that could be shared across generations.

The “100 Years On” series is that vision realised.
Despite the difference in generations, there’s still a strong sense of common ground, a similarity in stories shared and a strong connection between these men.

One other aspect of these images that Warrick wanted to maintain was authenticity. Warrick served with each of the men in the images, spending time with four of the five men in Afghanistan, and all except two are still serving today.

Even the naming of “The Catch Up” is testament to this idea of authenticity.
Minimal direction was given during the photoshoot and aside of the placement of the soldiers, everything else was improvised.
The smiles, the hand shake, none of that was directed or staged. The name, comes from the sim-ple fact that these mates were legitimately catching up, after not having seen each other for a few months.

Prints of these two images, “the Catch Up” and “New Mates”, the first in the “100 Years On” series went on sale in mid December, and after an enormous response on social media, profits from the sales of these two images were donated to the Soldier On organisation, to date, totaling $9250.00.

Over the next three years, more images will be added to the series, and the project will be finalised on Anzac Day 2018 – the end of the Anzac Centenary period.
Warrick sees this project as being an exploration of the idea of service, of sacrifice – in all its forms, not just Military, and planning has begun to continue to raise money for Soldier On, as well as additional charities.